This boutique hotel on the remote Manshausen Island in northern Norway is made up of four sea cabins which all feature stunning panoramic views over the surrounding islands and the Lofoten mountains to the north.

Manshausen Island was once part of one of northern Norway's largest trading posts for the fishing industry, today only the only remnants of its economic past are the massive stone quays which still remain on the Island. Since then, it’s become a hot destination for adventure seekers and lovers of the outdoors. Along with becoming a go-to locale for fishing, diving, cycling, climbing, kayaking, and hiking.

The four sea cabins were designed and built by architect Snorre Stinessen over the course of five years. They, together, form part of the Manshausen Island Resort which also includes a hostel-style dormitory and large 18th-century farmhouse that now acts as the hotel's reception, library and restaurant.

The resort was planned and laid out in consideration of the Island´s topography and the two main existing structures – the old farmhouse and the stone quays. The old farmhouse is situated on a small protected grassy plain on the Island and has been carefully restored, but also opened up towards the view of Lofoten in the North. 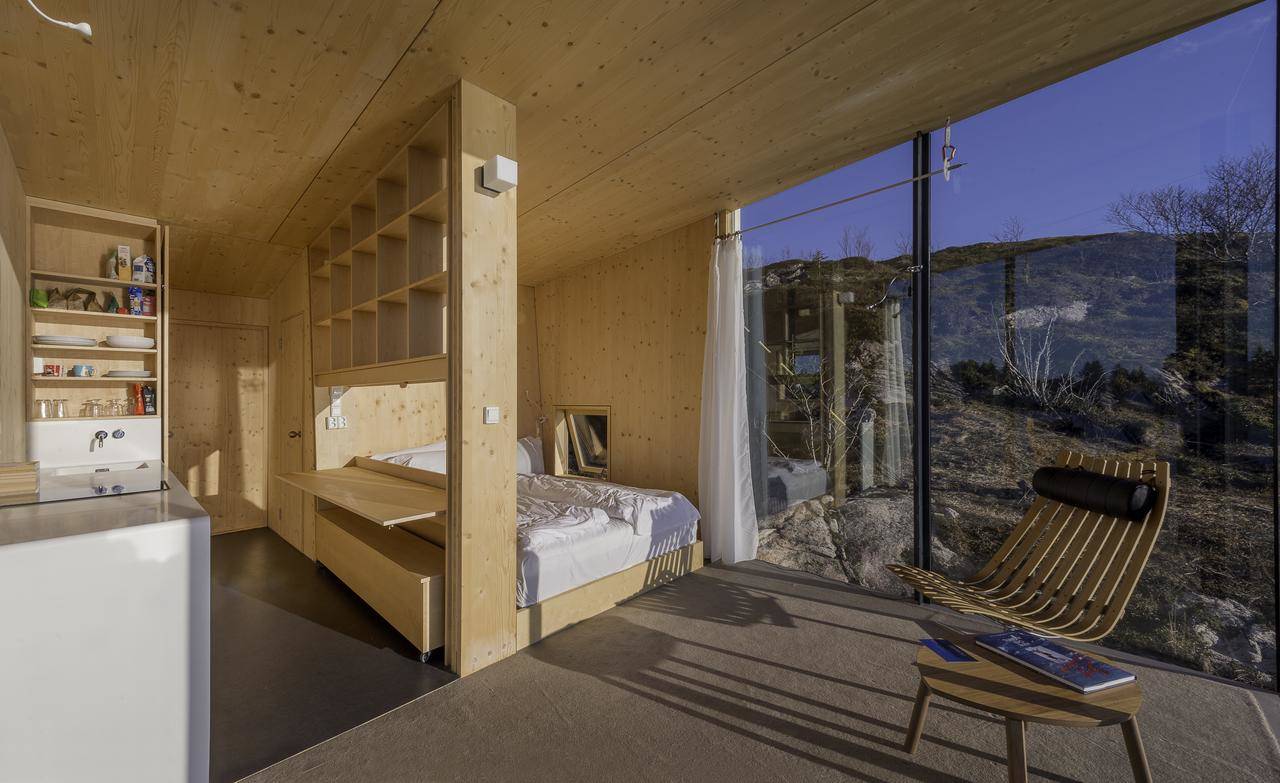 Each hut consists of two bedrooms with double beds, a small alcove, bathroom, shower, and a small kitchen. The cabins accommodate two to four guests or a family of five. The main bed is positioned in the main room, slightly withdrawn from the floor to ceiling glasses, to enable the visitor an around the clock experience of the outside elements, while still being comfortably sheltered.

Stinessen made sure that each cabin was carefully positioned to ensure the best possible views and the right amount of privacy.

You'll also find a hot tub on-site as well as a dam that you can enjoy at your leisure. The hot tub holds up to 14 people and leads down to the dam that holds saltwater that’s pumped into the contained area to keep it fresh.

The Steigen archipelago in northern Norway is almost as remote as it gets in Europe, lying 100km (62 miles) inside the Arctic Circle. Among other dramatic features, it is home to the continent’s largest colony of sea eagles.

With its unique location between small islands, sandy beaches and high mountains, Manshausen is one of Norway’s best adventure playgrounds. Here you can do everything from simple walks on the nearby islands, kayak paddling, fishing, enjoy the northern lights or the midnight sun from the hot tub, to more spectacular treks and activities.

The closest major town is Bodø. The hotel recommends that you take the ferry from Bodø city centre to Nordskot. They can then arrange for you to be picked up by their boat from Nordskot and transported the short distance to Manshausen. Read more about how to get to Manshausen.

It is also possible to drive from Bodø to Nordskot if you have access to a car. The estimated travel time by car is 3 and a half hours.

There are regular flights each day from Oslo to Bodø Airport with Scandinavian Airlines and Norwegian Air Shuttle.