AKA Patagonia is unique collection of strikingly designed cabins near the town of Puerto Natales in the remote depths of Patagonia. The cabins stick out of the landscape like the distant mountains that they were originally inspired by.

The hotel is unsurprisingly small and intimidate and consists of six cabins (private double rooms with a bathroom) and one communal cabin for relaxing, meeting and cooking. All of the spaces have been designed so that guests can experience the continuous flow of nature, both inside and out and are encouraged to interact with other guests and to experience the stunning location together.

Sustainability was top of mind when designing and building these cabins and large efforts were taken to try an minimise impact to the environment throughout all stages of the hotels life. All of the materials that were used to build the six guest cabins and the communal social area were prefabricated in a nearby shipyard before being transported and assembled on-site. Each module is then built atop pile foundations in order to have little impact on the environment. Pale wood from the native Patagonian Lenga tree covers the walls and roof, and forms the pathway decking. Whilst it looks pale and bright, the timber is expected to weather over the years as the cabins sit out in the elements are start become more ingrained in the landscape.

The hotel was designed by Chilean architecture studio Larrou who said "The ageing of the material is a key aspect of the project: achieving a fusion between the built environment and the landscape," it added. "Over time, architecture seeks to adapt to its environment, without competition or pretension, by becoming a part of it." 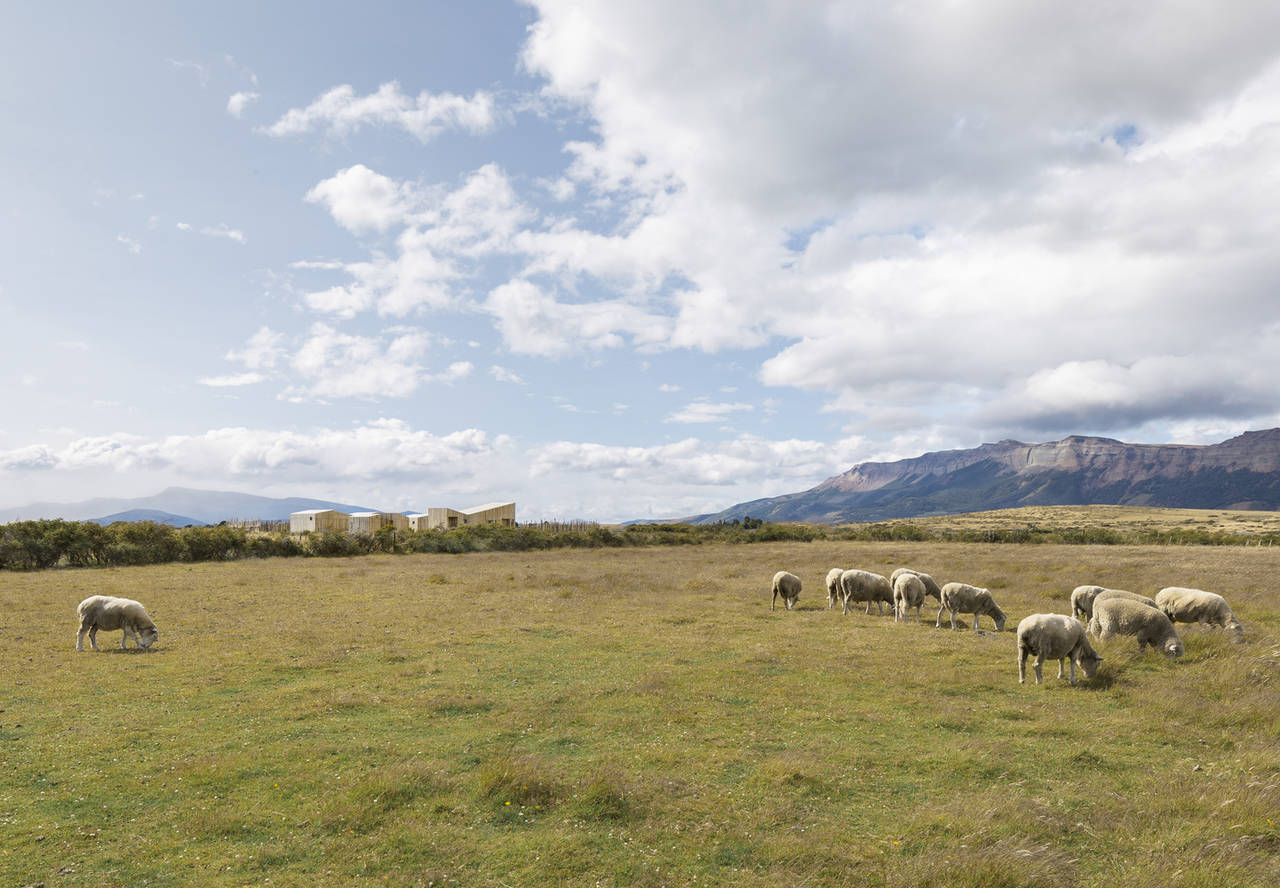 While the fronts of the cabins have no openings, the rears have large windows with glass doors that open onto private decks. From the decks guests can enjoy the stunning surrounding views, including expansive fields and Chile's Golfo Almirante Montt canal.

The same Lenga wood also lines the interior walls and ceilings of each of the cabins - each cabin is made up of a generously sized bedroom and bathroom. Darker wood frames the large windows and provides accents in the form of bedside tables and storage.

Details in the hotel rooms include dark, metallic wall lights, white bedsheets and decorative textiles. Wooden furnishings also decorate the communal area including the long dining table and the seating in the lounge.

AKA Patagonia is located just outside of the the town of Puerto Natales which is a port city on the Señoret Channel in Chile’s southern Patagonia. It’s the gateway to Torres del Paine National Park to the northwest, and the port for boats touring the Patagonian fjords. The hotel is about an hour away from the Torres del Paine National Park, which is famous for its jagged peaks, luminous lakes and ice fields and is widely considered to be one of the most spectacular nature reserves in the world.

The nearest airport is the Puerto Natales local airport which is located about 15 minutes away from the hotel by taxi. This is a small regional airport, however, and only has flights a couple of times a week to Santiago. If you want to take the scenic route then we recommend you hire a car from the Punta Arenas Airport (which has 3-4 flights a day to Santiago) and drive through the snow-capped mountain ranges to the hotel (this will take around 4 hours).